The European Asphalt Pavement Association (EAPA) has awarded Horst Erdlen, Head of the Business Unit, Road Construction of J.Rettenmaier & Söhne with the “EAPA Asphalt Advocate of the Year” award during its 10th Symposium in Paris on 1 June 2017. 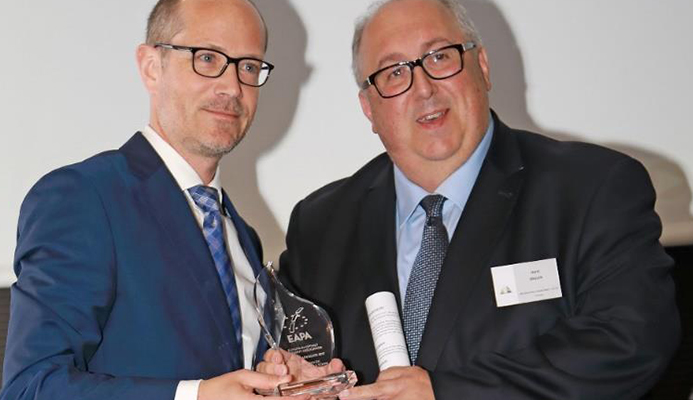 Together with his team Mr. Erdlen has been working for more than 20 years in the road construction sector and is responsible for the technical sales and marketing of additives for the asphalt industry around the world. The JRS marketing activities in road construction have always been different from others.

EAPA is actively promoting the benefits of asphalt pavements with the Asphalt Advantages campaign that has been established in the year 2014. Every support for the campaign, involvement and advocacy is highly appreciated, which could be e.g. the use of the materials of the campaign from the toolkit on the website www.asphaltadvantages.com, becoming involved as an asphalt advocate right there, and engagement with the campaign in the related social media channels Twitter, Facebook and LinkedIn.

About EAPA
The European Asphalt Pavement Association (EAPA) is the trusted voice of the European asphalt paving industry. With 39 Members and Associated Members, EAPA represents most of the asphalt pavement industry engaged in asphalt production, asphalt road construction and maintenance all over Europe.

EAPA is, and its mission is to remain the acknowledged contact point for its members, other industry organisations and of course the European Institutions. Being based in Brussels at the heart of the European Union, EAPA represents und serves its members successfully at the European level.

About Asphalt Advantages
Asphalt Advantages is a campaign jointly developed by EAPA & Eurobitume to promote the advantages of asphalt by providing useful information and credible evidence of the benefits of asphalt in road construction and maintenance. For the fields sustainability, comfort, safety and economy more than 70 advantages have been developed. The campaign ‘informs’ the ‘uniformed’ and helps road users and decision-makers improving their knowledge and awareness of asphalt's advantages. For this purpose, the website www.asphaltadvantages.com was created.